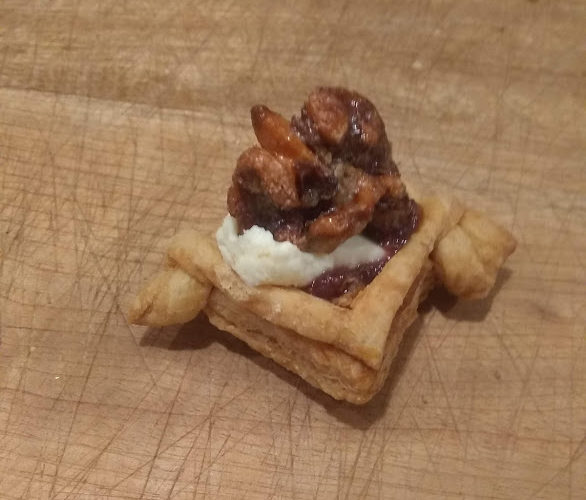 Much to my husband’s dismay, I love blue cheese. There’s nothing that’s quite like that hit of creamy, salty, funky complexity that you get when biting into a chunk of it. Out of respect for his (misplaced) blue cheese hatred, I try to avoid spending too much of our weekly food budget on an item that he won’t even nibble at. But during my initial menu planning meeting with the bride, we bonded over a mutual enthusiasm for a good quality bleu. I knew right away that it was a great choice to build an appetizer around.

Because of the complexity of flavors you get from a piece of high quality cheese, it’s something that I am always drawn to when putting together a canape. I’m not against mild flavors, but when you only have a square inch of food space to say everything you’re trying to say, flavors that pack an immediate punch are an easy fit. Nuts and fruit are natural things to include on a cheese tray, so I added candied walnuts and a fig jam to my plans. And since it all needed something to sit on, I decided to bake some vol au vent shells.

Once I had a general idea of what I was hoping to make, I began scavenging recipe outlines from internet sites and my cookbook stash. I found the fig jam to be too thick for my purposes as written and didn’t enjoy the depth of bitterness the added grapefruit zest added, so I upped the water and have edited out the zest for this version. If you enjoy a slightly more earthy/bitter flavor profile, feel free to add the fruit zest in along with the juice.

Place all ingredients in a small saucepan and bring to a gentle simmer. Cook for half an hour, until figs have softened and begun absorbing the liquid. Using a blender or food processor, blend the mixture until smooth, then pass through a sieve and return to the saucepan. Simmer for another 5-10 minutes, adjusting wine, water, and salt to taste. Cool and store in airtight jars.

Mix sugar, salt, and pepper in a large, shallow bowl. Bring a medium sized pot of water to a rolling boil. Drop your walnut halves into the water for 20-30 seconds, drain off the water, and dump the hot nuts into your sugar mixture. Toss together until the sugar has melted down evenly onto the nuts. Spread in an even layer on a greased, or silicone baking mat lined cooking sheet. (I made an error in judgement and substituted parchment paper, which resulted in slightly scorched fingertips as the nuts had to be pulled off while hot to avoid them sticking to the paper. Not the recommended method.) Toast in a 350 degree oven until the nuts are toasted and the sugars darken and begin caramelizing. Mine cooked somewhat unevenly with the quickest needing only 20 minutes and the slow pokes taking nearer 40 minutes. Allow the nuts to cool and set before storing.

For the Vol au Vent shells –

Make or thaw a sheet of puff pastry (yes, I can make puff pastry, but it’s a space and time consuming operation and since I was short on both for this operation, I went with the prepackaged frozen variety.) Roll the sheet out gently to a large rectangle. Using a clean ruler, mark and cut 1.5″ squares. Then, leaving two opposite corners attached, use a paring knife to cut a second square a 1/4″ inside of the first. Using an egg whisked with 1 TBSP of cold water, brush each square lightly. Here is where any origami skills in your past will come in handy. Fold one fully cut outer corner to the opposite inner corner. Then fold that outer corner to the inner corner of the initial side. The two corners that were not folded and not fully cut through will create small loops as you do this. Gently press the new double layer of pastry together. You will have created a small square with a thin raised edge. Continue on until you have the number of canape shells you desire. If your pastry becomes too warm to work with just return it to the fridge for 20-30 minutes. Once all the shells are prepped, arrange them on a baking sheet about 1″ apart. Chill for 30 minutes, then bake at 425 degrees until light golden brown. Cool and store in an airtight container.

Dab a 1/2 teaspoon of fig jam into each pastry case, then drop in a small slice of cambozola or other full flavored soft blue cheese. Finally, press a walnut half into the cheese until it will stand upright on its own. And there you have it. A classic cheese board flavor combination, turned into a bite sized finger food.