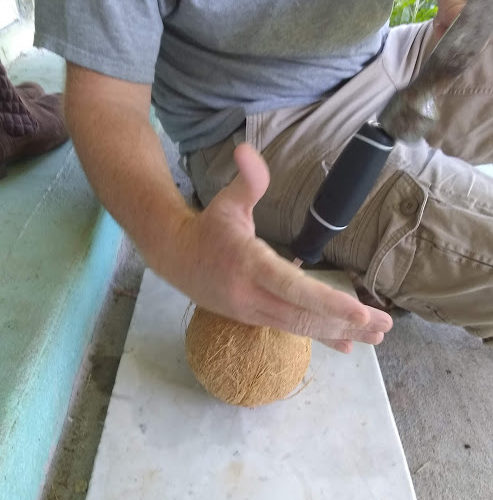 Did you know that the advised method for cracking a coconut involves safety glasses, a screwdriver, and a hammer? Neither did I, until I was browsing through the hilarious Basic Skills Challenge videos that Epicurious produces. It was one of their few challenges that had me paying attention to the very end, where they reveal the “answer” to the test. Then I showed the video to my housemate and next thing I knew, we had a coconut in a our fridge so that we could give it a try.

Our first venture into coconut cracking was rather disappointing. The flesh looked nice and white, but the whole thing tasted more like dish soap than coconut. One coconut wasn’t statistically significant enough to dissuade us, though, so on our next trip to market, we acquired another. And fortunately for the sake of my cookbook roulette recipe this week, it was a winner.

This week’s selection, The New American Cooking, is brought to you courtesy of a proper random number generator. I received it as a high school graduation gift, just before entering into the culinary field in earnest and it’s a book that I’ve had to grow into. When I first started consider the kitchen as a career, I wholeheartedly wanted to focus on pastry and baking and was only dissuaded from this approach by the fact that our local culinary program didn’t offer a separate Pastry Chef degree option. New American Cooking was just a smidgen too weird, a touch too focused on natural foods and unfamiliar techniques. Its subtitle, 280 Recipes full of Delectable New Flavors from Around the World as Well as Fresh Ways with Old Favorites, is not misleading. Browsing through it is still odd, since the recipes range hugely across cuisines, meals, skill levels, and flavor profiles. But now that I have a bigger frame of reference for savory food types, it’s easier to flip through it and get excited about the recipes that I would have once dismissed as too strange. This is a cookbook that dabbles in a little bit of almost everything and this week I chose to cook something easy, if slightly exotic.

Heat the butter and oil together in a large skillet, then add the onion and cook until lightly browned and soft. Mix in the spices, coconut, and rice, and stir together until the rice is toasted and the spices are aromatic. Pour in the chicken broth and bring to a boil. Reduce the heat to a simmer, cover well, and simmer for 15 minutes. The water should all be absorbed. Remove from the heat and let sit for 10 minutes before serving.

It’s probably not a shock to you at this point that the recipe of the week involves fresh coconut. We left the cracking until the last minute, then Shane washed off his marble slab, disinfected his tools, and got to work.

My approach to the halves of the coconut felt rather non-scientific and very inefficient, but I stuck with it for the sake of completing this project, breaking the nut into gradually smaller pieces and rubbing them across my grater until I had a cup worth of freshly shredded coconut.

I had no turmeric, but since that’s the spice known as Poor Man’s Saffron and I did happen to have a few pinches of saffron on hand, I threw those in instead. And rather than hunt down a cinnamon stick, I used some of our extensive stash of ground cinnamon.

Dinner was already late by the time I started, so I made a couple of unfortunate choices where the rice was concerned, including not getting it covered as thoroughly as I ought to have and not checking on how well it was cooked immediately after the timer went off (I was elbow deep in mixing up a bowl of broccoli slaw). I’ve made perfect pots of Basmati rice in the past, so I was all too well aware that this was not one. If I had managed things a tiny bit better, I imagine the pot of rice, the bowl of slaw, and the pan of butter-basted salmon would have been ready in tandem. As it was, I put the rice back on the stove with a better improvised lid while we ate our protein and vegetables, and then we returned and ate the rice on its own.

My initial reaction to the recipe was that, for a recipe with coconut in the title, coconut wasn’t the flavor that came to mind with the first bite. It’s really not surprising when you consider how mild coconut is compared to cloves, cinnamon, saffron, and cumin, but I think I was still expecting more dispersed coconut flavor.

The twists of coconut did add a nice chew and little bursts of taste to the dish, in between the overall impression of classic spiced rice. I doubt I would make this again exactly as written, but it’s a good base idea to work off of, perhaps mixing up spice combinations and experimenting with ways to increase the coconut punch.