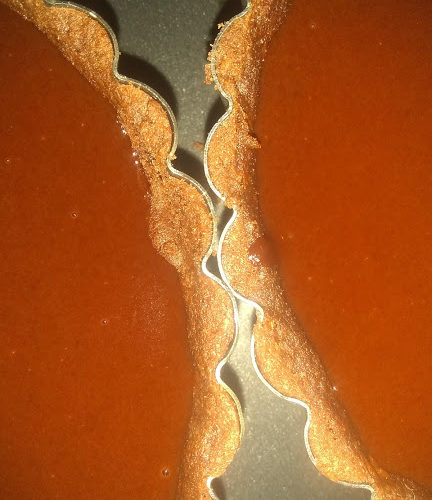 Have you ever followed etymological click bait and read detailed paragraphs about the invisible differences between American and British usage of what is apparently the same word? I’m referring to things like ‘boot’, ‘bonnet’, ‘jumper’, and ‘biscuit.’ Every once in a while I’ll have a moment of epiphany when I track down another difference and realize that while I hear one thing, I was meant to understand something quite different. I was bemused to see the word ‘flan’ in this week’s recipe, since to me flan is the eggy, caramel topped custard of the Spanish-speaking dessert word and this dessert had nothing custardy, nothing caramel, and nothing Spanish about it. But it didn’t take much research to find out that this is a purely American understanding of the word – in British English it seems the words flan, tart, pie, and quiche are nearly interchangeable ways to refer to dishes composed of a crust and a filling. I hadn’t really registered before now that this week’s cookbook was published in England, since it uses cups, tablespoons, and degrees Fahrenheit in all its recipes, but this little vocabulary difference finally alerted me.

This week’s cookbook is simply titled Chocolate. Which made it a highly appealing volume when I was thirteen and spotted it on a bookstore shelf. It was chock full of pictures, exotic sounding desserts, and a couple of intriguing savory dishes. The difficulty ratings and time estimates listed with each recipe are probably one of the reasons my mother OK’ed it and for a few years it was a go-to when I wanted to make something interesting and exciting for company coming over or a potluck gathering. But I found over time that while the descriptions of the recipes were great, the final products had a tendency to be disappointing. “Dry”, “not much flavor”, and “OK, but not a favorite” are a few of the notes penciled in the margins. I cringe every time I page past the Devil’s Food Cake photo, with the palest of brown cakes sandwiched in white frosting, as if to highlight the lack of chocolate involved. I paged through the book a few times before I settled on this week’s test of choice, not noticing until I started taking process photos that I had chosen the cover recipe!

Combine the dry ingredients together, then mix in the butter and yolk until the dough is just combined. The original recipe calls for an hour of refrigeration, but I found the dough very hard and crumbly when fully chilled. Since it is a stiff mixture, I might try adding a bit more liquid, or working with the dough at a higher temperature if I use this pastry recipe again. Alternatively, use any sweet chocolate shortcrust pastry you’ve had success with in the past.

Once the dough is mixed, roll it into a thin sheet and line your tart pans. I used ten 4″ mini-tart dishes, and ended up patting the pastry in, rather than rolling it out. Bake the shells in a 350 oven for about 15 minutes, until they are firm and look dry. I used weights in half of my crusts and found I had more difficulty for no real difference in results. The unweighted crust kept its shape fine, while the weighted didn’t cook as evenly and I had issues with it sticking to the weights. Once your tart shells are cooked, set them aside to cool while you mix the filling.

Warm the cream and jelly together on the stove, until the jelly is fully dissolved. If there’s anyone in your life who likes pink, call them over to admire the lovely pale shade of rose the cream takes on as the jelly incorporates. Pour the hot cream mixture over the chocolate and butter and whisk until fully combined. Divide the ganache equally among your tart shells and let cool. I cooled them down to room temperature and then popped them in the fridge to finish firming up.

Super simple sauce recipe – throw everything in the blender and whiz it together until smooth. This makes a loose sauce which I thought worked well with the firm textured ganache, but if you’re looking to reduce the messiness a little, you could always simmer it down into a thicker syrup.

To serve the tarts, unmold them from the pans, pour some blackberry syrup over the top, and throw a few fresh blackberries over the whole affair.

This was a fun recipe just because it provides the full set of dessert, sauce, and garnish, making it seem just that touch fancier. Blackberry and chocolate is a lovely combination and I got to use up some of the fresh blackberries that our garden is happily producing this month. I had difficulty working with the dough and a couple of my shells broke when I was unmolding them, but I can’t fault its flavor. My only real complaint is that the filling had a graininess to it that you don’t usually want in a ganache. I think this issue could probably be eliminated if I took the time to sieve the warm jelly mixture. We shared a couple of the tarts with my mother and she credits them with helping her recover from a bout of West Nile Virus, so Chocolate might get another shot at joining my more regular cookbook rota.