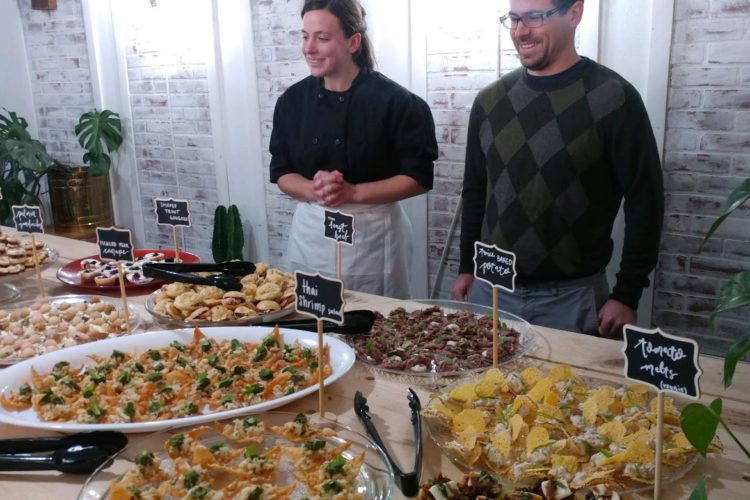 First off, apologies for the relapse in photo quality. I apparently did not take any process shots as I worked on these, so all I have for illustration are the phone photos that my husband snapped for me on the day of event….

This one is all about that crispy wonton base. In my first winter resort kitchen, I would slide the triangles of wonton wrapper into the hot fryer oil and stand hypnotized, watching them curl and twist and bubble into unique shapes. Afterward, they became the accompaniment to a tuna poke salad. With its multiple tubs of neatly minced components it was one of my favorite items to prep, and the assembly of the dish – tossing the pink cubes of tuna with a dash of ponzu, a splash of lime juice, and a pinch of toasted sesame seeds – felt more like art than cooking.

That being said, I think I’ve mentioned before that I’m not the biggest fan of most seafood, particularly the raw fish versions. Do I occasionally feel like a culinary failure when I turn my nose up at exotic island dishes in favor of a basic garlic and lemon shrimp pasta? Yes. Yes I do. But sitting by the fireplace in small town Idaho in the middle of November, I figured that while sticking to shrimp for the seafood canape wasn’t going to make headlines, it wasn’t likely to make anyone sad, either.

I feel like I can struggle with my Asian flavors and techniques, since most of my formal education and experience has been much more French cooking forward. And even though I tested components as I went along, I felt like I had missed a trick when I tasted these as a final product. They were lacking a bit of the punchiness that you usually get when you load something up with ginger, garlic, lemongrass, cilantro, sesame, fish sauce, and more. For all the layers and components that went into them, I think they came out pleasant, but forgettable. So, if you’re looking to make something with splashy visuals and a retiring flavor profile, give these guys a go. Alternatively, amp up the aromatics and spices and you might end up creating something as addictive as a curly, crispy wonton.

Combine all ingredients in a food processor or blender and process until smooth, stopping to scrape down the sides as needed. If the ingredients aren’t coming together, add more oil, 1 tsp at a time, as needed. Taste for balance and adjust to your personal preference. Store in an airtight container to prevent oxidization. Pesto freezes beautifully, so I made this a month in advance and just let it thaw the day before I needed it.

Heat a large skillet over high heat until very hot, then add shrimp and vegetable oil. Stir constantly until shrimp are cooked through, then remove from heat and set aside to cool. Meanwhile, finely mince the garlic, jalapeño, shallots, mint, and cilantro. Combine the lime juice, lemongrass paste, and brown sugar in a medium bowl and add all your minced ingredients. Cut the cooled shrimp into small dice, then add to the bowl with your other ingredients. Toss until combined. Refrigerate overnight to allow the flavors a chance to meld, then taste for any needed adjustments.

Cut 3″ square wonton wrappers in half along the diagonal to create triangular pieces. Heat vegetable oil or liquid shortening to 375 degrees using a deep fryer or large, heavy pot. Drop the wrappers into the oil, keeping a pair of tongs nearby to unfold the wontons as needed. At little bit of folding is fine, it will just provide some dramatic curves, but a complete doubling over is too much. You can have more than one in the oil at once, but you’ll want to drop the pieces in individually so that they don’t glom on to each other. Fry until golden brown and crispy, then drain on paper towels until cool.

Arrange your wonton chips in a single layer on your work surface. Using your finger tips or a small spoon, place a tablespoon of the shrimp salad on the widest part of each wonton. Place your pesto into a piping bag and pipe a small dot on the top of each heap of salad. Garnish with small sprigs of mint, basil, and cilantro.