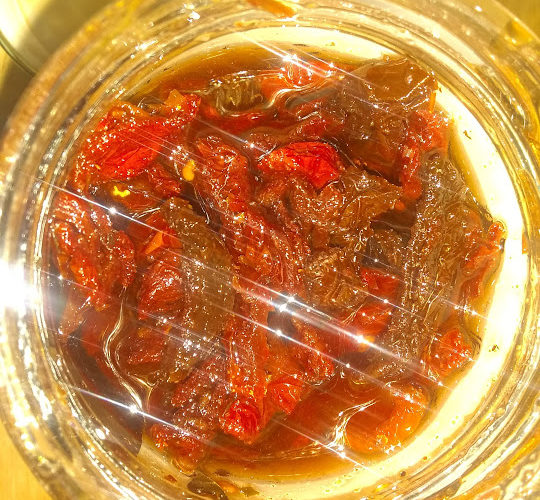 One of the best received vegetarian appetizers I have encountered during my time in kitchens, these little bites taste a bit like pizza on toast and a bit like caprese salad. I’ve made many hundreds of them, since they were a permanent resident on the banquet menu of the Colorado restaurant where I spent three winters on the events team and one summer running most of the wedding caterings.

The base for this appetizer is Pain Rustique, or any similar loaf of flat artisan bread. Slice the bread into bite sized squares, between 1 and 1.5 inches on a side and arrange it in a single layer on a baking sheet. Drizzle the bread with olive oil, sprinkle with salt and pepper, and bake at 400 degrees until it’s golden and toasty. This usually takes between 5 and 7 minutes.

The next layer is a combination of tomatoes and zucchini. Slice a zucchini lengthwise into planks about an 1/8 of an inch thick and grill them for 1-2 minutes on each side, until they have nice grill marks and begin to wilt down. Then dice them into 1/8 x 1/8 x 1/8 inch cubes (also known as a brunoise cut). Take a jar of sundried tomatoes preserved in olive oil1 and brunoise them as well. Mix the tomatoes and zucchini in a 1:1 ratio. Place a teaspoon of this mixture on each bread square. They might look like they can hold more, but if you make your heaps too high they usually just end up falling off on the serving plate.

Next up is the fresh mozzarella. All you need to do here is cut the cheese into squares slightly smaller than your bread and place one slice of cheese on top of each pile of tomato mixture. Place the tray back into the oven until the cheese is melted and just starting to brown in spots.2

The first garnish for these is a drizzle of balsamic reduction. It’s become popular enough of late that you can find it in squeeze bottles in the vinegar aisle of grocery stores, but it’s also super simple to make at home. Just pour a generous amount of balsamic vinegar into a heavy-bottomed saucepan and cook it over low heat until it simmers down into a thick syrup. It should reduce to about 1/3 or 1/4 of its original volume. To test its readiness, dip a spoon in, pull it out and mark a line across the spoon. If line holds its shape, the reduction is ready. If the vinegar runs back together again, let it simmer longer. Using a spoon, piping bag, or small squeeze bottle, drizzle a few lines of the cooled vinegar reduction across the top of each canape.

Finally, chiffonade3 a few leaves of fresh basil and sprinkle them over the tray of canapes.

Viola! That’s all there is to it. Simple, tasty, and popular in every crowd I’ve ever been a part of.