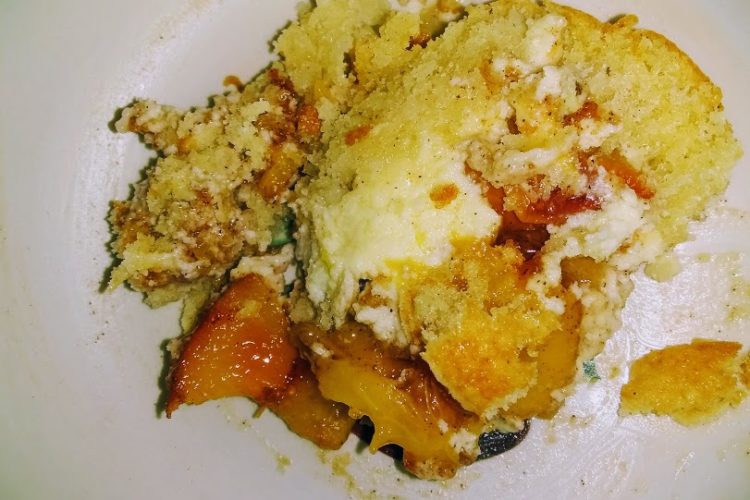 When I couldn’t give him a straight answer about what I was working on this morning in the kitchen, my husband asked me how often I start cooking without knowing what I’m making. The answer is ‘quite a lot, actually’. The only trouble I usually run into is when something turns out amazingly well and I neglected to take notes while I was building it. Fortunately, I still have the latest experiment fresh in my mind, so I can try to capture the steps to eventually recreate the magic that I just consumed.

Wake up after a hot August week to the sound of thunder and pattering rain dumping on the metal roof. Open all the windows to let the fresh scents in, feed the dog, feed the cat, cook a couple of sunny-side-up eggs for the husband, start the tea kettle, consider the breakfast options. Realize there are four peaches aging in a not entirely graceful manner in the fridge and pull them out. Consider making peach cobbler, peach crisp, peach pie, poached peaches, or something else. Give up on knowing what’s going on and start slicing up the fruit. Peel half of it before getting bored with the process and leaving the skin on the other half. Toss the peach chunks in a few tablespoons of cinnamon and sugar, set them aside. Think vaguely of crepes and blintzes, crack an egg into a bowl and cut about 4 oz of cream cheese over it. Start stirring it together, develop butterfingers and juggle the bowl in mid-air for a slow-motion minute before watching it crash onto the floor and tip over. Rescue the top layer and let the dog happily lick up the slick of raw egg on the vinyl. Begin again, cream cheese in a bowl, this time beating it with a bit of granulated sugar before mixing in the egg. Add three to four teaspoons of cornstarch to the peach mixture and divide it into five ramekins. Pour the cheesecake mixture over the peaches, decide that the ramekins are perfect for cobbler after all and pull out a recipe for sour cream coffeecake. Mentally divide it by four, rounding the numbers here and there to keep things simple. Squeeze the last dollops of sour cream out of the tube, then add heavy cream until the measuring cup’s contents match the needs of the recipe. Ignore the recipe and melt the butter, because it’s easier to mix everything in one bowl. Use a tablespoon measure to estimate 1/4 tsp amounts, because it’s not like anything else in this mixture is measured precisely. Add a few shakes of uncalled for nutmeg, because it’s a cloudy day, and nutmeg is delicious. Taste the batter and add a few more shakes. Spread across the top of the peach/cream cheese mixture, sealing it up as much as possible, and pop into a 350 degree oven for 17 minutes. Check the color of the coffee cake mix, decide it needs a bit more and let it cook for another 4 minutes. Loosen the edges of the topping with a table knife and invert into a bowl. Admire the way the cream cheese has formed a sauce around the warm, jammy peaches while the coffee cake is a steamy, fluffy island beneath them. Devour while admiring the success of the experiment. Remember to write down what happened so that someday, it could happen again.