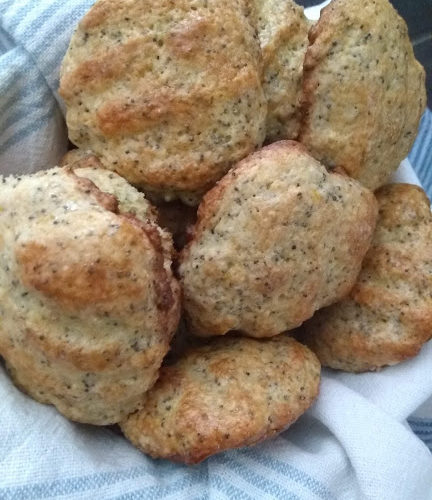 Buckle in for a crazy series of baking posts. The random number generator has selected three books in a row that have nearly no allowance for non-baked items. If I were really trying hard to find a cop out, I could make the silly things like honey butter, whipped cream, and freezer jam that many baking books seem to include in the back few pages, but it does seem a bit counter to the spirit of exploration that I’m trying to bring to this project.

Normally, there’d be no complaint about spending time baking, since I find it the most soothing and rewarding of kitchen activities. Unfortunately, this spate of blog driven baking came right on the heels of my resolving to try to have fewer sugary baked goods just laying around the house for no reason. But if the internet says I have to, I suppose there’s no real counter-argument to be made.

This week’s baking project was from a tiny cookbook that my oldest brother gave me years ago and it was published back before scones became the ubiquitous coffee shop pastry that they are today. Judging by the comments in the essay introduction, though, the same factors that can make scones polarizing today have always been an issue. Drier than muffins and certainly less cakey, I enjoy scones for their simplicity and the lack of need for special baking tins, liners, or shaping tools. This Simply Scones cookbook has a variety of sweet and savory varieties, and at this point, many penciled notes in the margins from previous recipe tests.

I elected to make citrus and poppy seed mini drop-scones. I didn’t follow the recipe to the letter, partly on purpose and partly as a consequence of absentminded baking conversions. If I’m channeling my full OCD potential, I will write out a fresh copy of the recipe with the converted ingredient values down to two decimals, but if I’m being off-the-cuff about it, I’ll keep the whole thing in my head. This approach worked right up until the moment when I neglected to halve one of the ingredients and completely changed the consistency of the dough mixture. Fortunately, scone batter can function through a range of thicknesses, so I just shook my head and carried on with the unplanned adjustment. Here’s the recipe as I ended up making it –

Preheat the oven to 350 degrees. Mix together the flour, sugar, poppy seeds, cream of tartar, baking soda, and salt. Cut in the butter until the largest chunks are the size of small peas. In a separate bowl, mix the orange juice, lemon zest, and 1/2 of the whisked egg. Pour the liquid ingredients in and stir gently until the dough is just combined. Drop the batter by rounded tablespoon fulls onto a lined cookie sheet. I used a dough portioning scoop, which worked well, since the mixture is quite wet and sticky. Flatten the scones with the tines of a fork dipped in sugar, then brush the tops with the remaining whisked egg. Bake until golden brown and set, about 15 minutes.

The scones came out light and moist, with a nice crunch from the poppy seeds. As with many lemon-poppy baked goods, I found the citrus to be a nigh invisible flavoring. It would have been nice to actually taste some of that orange or lemon. Considering that the zest and juice were the ingredients I inadvertently doubled, this might require some reduced citrus syrups or extracts. I was admittedly delighted with the way my fork pressing caused them to have madeline-like ridges and I might have to experiment more with that technique. I’m gradually nibbling my way through the batch, eating some as afternoon snacks and some as my weekday breakfasts and I can’t fault them as a tea-tray addition.